Outcomes of the participatory process to involve society in identifying options to manage water resources in the face of global change were vividly discussed at the BeWater General Meeting held in Barcelona, Spain, from 4-6 November 2015. The BeWater project partners and several stakeholders gathered to take stock of all work that has been done during the first two years and to agree on the next steps to develop adaptation plans for four case study river basins.

An important part of the meeting was dedicated to present and discuss the outcomes of the recent stakeholder workshops and the water management options that were formulated for the four case study river basins Pedieos (Cyprus), Rmel (Tunisia), Tordera (Spain) and Vipava (Slovenia). PROSPEX and EFI provided an overview of all steps in the participatory process, through which a total of 102 water management options were identified and evaluated. INRGREF, CyI, CREAF and IzVRS provided detailed insights on the options and their potential impacts on each of the river basins.

Deep Blue Consulting developed and presented a policy analysis scanning tool. During next steps in the project, this tool will be used to provide a comparative analysis of local water policies and other sector policies for each of the river basins.

Considering the identified water management options and forthcoming policy analysis, ECOLOGIC presented the outlines of the draft river basin adaptation plans. First versions of the four adaptation plans will become available by the end of 2015. These draft plans will serve as input to a new round of stakeholder workshops in each of the case study river basins, currently scheduled to take place in the period March-April 2016.

To ensure the highest quality for all BeWater outputs, JRC and Anbessa Environmental Consulting presented a concise overview of the progress of the BeWater project towards its general objectives. This was complemented with suggestions for possible ground for improvement of certain BeWater activities so to fully achieve project’s general objectives. This presentation was complemented by Europe for Business who presented an analysis on how the BeWater project could establish interactions with funding agencies and other projects to ensure the heritage of the BeWater approach and outcomes beyond the project’s life time.

The meeting was concluded with a field trip to the Tordera river basin. During the field trip, visits were made to the Montseny Natural Park and Sant Celoni. Josep Argemí, Head of the Infrastructure and Maintenance Unit of the Montseny Natural Park Administration received the BeWater partners. He explained the park’s management model, which tries to harmonise local economic activities with nature conservation. For example, the Park Administration has developed a management model to concentrate intense touristic activities in certain areas, while other park areas are left undisturbed. In Sant Celoni, Marta Miralles, responsible for environmental policies at Sant Celoni Municipality, received BeWater partners at the “Broken Bridge”, a cultural heritage site in the central part of the Tordera River. Here partners could observe the invasion of the river space by different infrastructure, but also the recovery of touristic sites that allow people to get closer to the river, enabling awareness rising on the importance of its conservation.

The general meeting was very successful and productive, thanks to strong commitment by all 26 consortium partners and 11 stakeholders that were present. The project partners will meet again in spring of 2016. 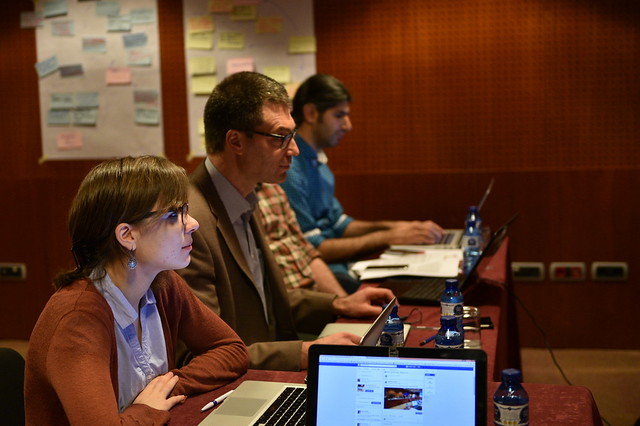